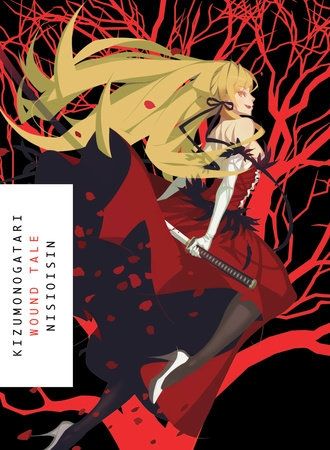 A stand-alone prequel to the leading series by the 33-year-old novelist whose first printings are now second only to Haruki Murakami's, this story about a blond female vampire on a "tourist visit" to the country is being adapted into an animated feature for Japanese theatrical release in late 2015/early 2016.
Around midnight, under a lonely street lamp in a provincial town in Japan, lies a white woman, a blonde, alone, robbed of all four limbs, yet undead. Indeed, a rumor's been circulating among the local girls that a vampire has come to their backwater, of all places.
Koyomi Araragi, who prefers to avoid having friends because they'd lower his “intensity as a human," is naturally skeptical. Yet it is to him that the bloodsucking demon, a concept “dated twice over," beckons on the first day of spring break as he makes his way home with a fresh loot of morally compromising periodicals.
Always disarmingly candid, often hilariously playful, and sometimes devastatingly moving, KIZUMONOGATARI: Wound Tale is the perfect gateway into the world of author NISIOISIN, the bestselling young novelist in Japan today. The prequel to BAKEMONOGATARI (“Monster Tale"), this is where the legendary MONOGATARI series, whose anime adaptations have enjoyed international popularity and critical acclaim, begins. A theatrical feature based on KIZUMONOGATARI is due to be released in Japan in January 2016.